As mentioned in an earlier post, I grew up in a tight knit neighborhood, filled with baby boomers and friends that were as close as family. Safety and freedom were never an issue – kids played independently and our doors remained unlocked. This slice recalls an incident when that comfort was interrupted, but with a humorous twist! I will refer to my mother as Annie T, a term of endearment.

Every Sunday night, my family of five would squeeze into the TV room to watch our weekly shows. Some of our favorites were Lassie, The Wonderful World of Disney, Jackie Gleason, featuring the June Taylor Dancers, and believe it or not, The FBI – in color! I’m not sure if I loved the show or the actor, Efram Zimbalist Jr

. My mother, an avid reader, loved mysteries and detective stories, so The FBI and others topped our list. Other shows such as Mannix, Colombo and The Streets of San Francisco followed later, and of course her favorite, Hill Street Blues was a staple in the 80’s.

Her love for the intrigue and mystery of crime began in her childhood. Raised in a raucous Irish home, she was the daughter of a bookie, who sold newspapers on a corner in Jersey City and owned a candy store as well. Both acted as “fronts” to maintain my grandfather’s side business.

My mother and aunt would work up front in the store, while my grandfather organized poker games in the back. Most of the card players were cops and councilman from neighboring towns. According to my mother, who loved to embellish stories, there was even a button under the counter in case there was a bust, giving those in the back a chance to get out. You can easily see where her love for this type of drama grew. Little did she know then, that she’d get a chance to play “cops and robbers” in our own neighborhood.

Like most kids at that time, we treasured our bikes. Sting Ray’s, Cinderella’s and Schwinn’s littered the street in a variety of styles and colors. Unless we saved up our own money, our bikes were given as Christmas gifts or for special occasions such as birthdays, Communions/Confirmations and graduations. New bikes were paraded around proudly while everyone gaped at the sleek colors and dazzling chrome – prized possessions in the gateway to independence. But sometimes that independence came at a cost as my brother Michael soon discovered.

Michael and his buddies were riding a little ways from home near the river. Leaving their
bikes on the side of the road, they were scaling the bank exploring the current. A few minutes later, there was a rustling above them. “Hey, did you hear that?” Michael asked. His buddy Roy looked up and shouted, “They’re stealing a bike!” By the time they reached the top, the boys were gone – two of them, one riding on Michael’s bike. “Quick! Hop on the bar!” said Roy. The two of them along with the rest of the crew, hopped on their bikes and took off.

As Michael and Roy neared our house, they yelled to my other brother to get my mother. Annie T sprung into action. Keys in hand, she had just gotten a call from a neighbor down the street that two kids, strangers, were riding bikes; one of them was on Michael’s new bike. Annie T told us to get in the car. Eight kids squeezed into the back seat and back benches of the station wagon. She peeled out of the driveway, careful not to hit the pile of bikes cheering us on from the sidelines. 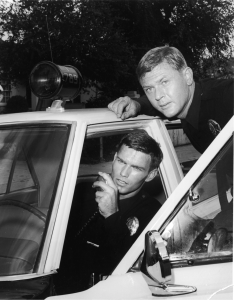 As we passed our neighbor’s house, we noticed they were slightly ahead of us already in pursuit. If our car had a police radio, you could almost imagine the dispatcher’s voice. “1 Adam 12, 1 Adam 12, two males riding bikes headed down Riverview Drive nearing Union Boulevard. Suspects approximately twelve years old, wearing jeans, one riding a green ten-speed Schwinn.” I’m not sure how we didn’t catch up or pass them, but the chase finally ended in the Two Guys parking lot. Officer Annie stayed with the young culprits, while our neighbor got help inside. The neighborhood watch did their job. Although the doors of our home remained unlocked, we made it a point to lock the shed!

6 thoughts on “The Neighborhood Watch #SOL17”